Welcome to our new app that contains the Jewish Bible in English.
Download it for free and read its verses daily on your phone, even offline. Once the app is on your device, you’re able to read the Bible without an Internet connection, wherever you are.

We offer the JPS Jewish 1917, the first translation of the Tanakh (Hebrew Bible) into English.

In the early nineteenth century, an English translation of the Bible didn’t exist and most American Jews couldn’t read the Sacred Scriptures because they were not lettered in Hebrew. 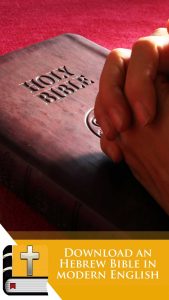 A committee made up of scholars of the three major Jewish institutions began to translate the Old Testament of the Bible.

The aim was to create a new Bible in the best English possible and without all un-Jewish and anti-Jewish phrases, expressions, and usages. They wanted to introduce a traditional Jewish interpretation to reflect Jewish feeling, law, faith and tradition.

The Jewish Bible contain neither the books of the apocripha nor the Christian New Testament.

The order of the books in the Jewish Bible is: